An artist's correspondence is often a chosen place to approach his work and closely follow its development. Unsurprisingly Antonioni’s correspondence is one of the most precious section in the archive. Organised in two sections – “Correspondence Received” and “Correspondence Sent”, it brings together material closely related to his professional life, with senders and recipients ordered alphabetically and chronologically. 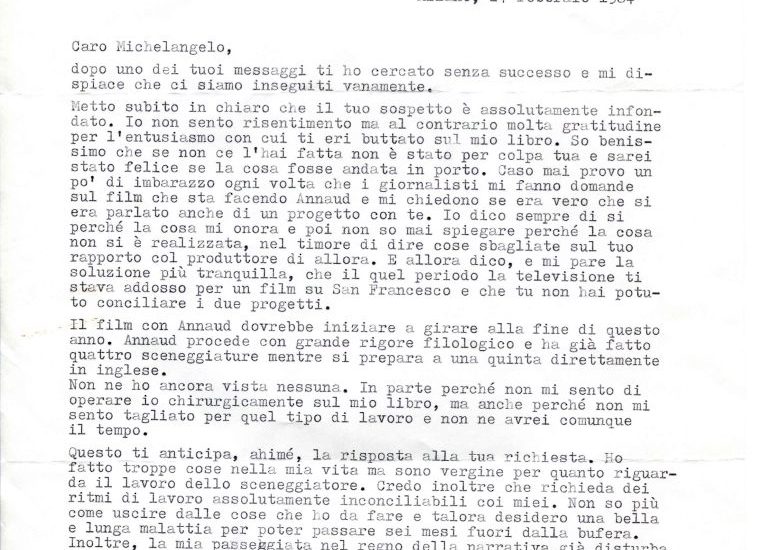 The first section contains a lengthy list of correspondents including not only eminent figures in the world of cinema – such as Luchino Visconti and Federico Fellini, or the screenwriters Elio Bartolini and Mark Peploe, or great actors and actresses such as Marcello Mastroianni and Jeanne Moreau – but also leading exponents in other artistic fields, such as the painters and sculptors Giorgio Morandi and Arnaldo Pomodoro or the writers Italo Calvino, Leonardo Sciascia, Julio Cortázar and Umberto Eco.
Given the impossibility of providing a summary of all this material, here we have limited ourselves to mentioning some particularly striking examples. In a letter dated 1967, Giulio Carlo Argan (9B/2, fasc. 65) invited the director to take part in a conference on “the visual space of cities: urban planning and cinema”. The event with a clear multidisciplinary focus included Antonioni’s encounter with a numner of architects and urban planners. In a letter of 1975, the former reporter Vittorio Bonicelli declared he was moved by Professione: reporter (The Passenger, 1975) and wondered at the filmmaker’s deep insight into the “horrible burden” of the occupation. Finally, other letters, such as one from Sciascia in 1959 dealing with L’avventura (1960) or from Calvino in 1965 relating to Blow Up (1966, 9B/4, fasc. 311), show that Antonioni often relied on the advice of great writers. A trust that was apparently reciprocated: in a letter sent by Umberto Eco in 1984 (9B/2, fasc. 123) it turns out for example that Antonioni was to have directed the adaptation of The Name of the Rose, but to Eco’s great regret the project was then passed to Jean-Jacques Annaud, probably for production reasons.
Less extensive than the first group but equally interesting in terms of content, the “Correspondence Sent” brings together the drafts of letters sent by Antonioni in the 1960s and 1980s. Also in this case the list of recipients – Argan, Eco, Giulio Einaudi, Piero Ottone and others – confirms Antonioni’s response to wide-ranging cultural requests. But such exchanges also offer an insight into on the genesis of his films. In this respect, see the long undated letter to Tonino Guerra and Ottiero Ottieri (b. 9A/1, fasc. 33), both of whom worked on the script of L’eclisse (1962), in which the Antonioni explains the psychology of the character of Vittoria in the smallest details.